Enjoy Your Yard In Peace. Get rid of those pesky hornets, yellow jackets, and wasps the right way by contacting us!

While many people don’t really know what the difference is between bees and wasps. The main difference to remember is that wasps live off of other insects while bees feed on pollen and nectar. If provoked both of these will sting you and it could be life threatening if you are stung by too many bees at one time.

It is always best to consult with a licensed extermination professional that specializes in bee and wasp removal services in Sacramento. Give us a call today for all your bee control needs and keep your family and pets safe from harmful bee stings.

Request a Quote
About Us

There are a few flying insects that are common around homes and businesses throughout spring and summer. Bees, Yellow Jackets, and Wasps are the most common and there are a few key differences between them all. Wasps live off other insects while bees feed on pollen and nectar. Wasps also have a vibrant yellow and black coloring and a smooth body while bees are duller in color and have hairy bodies. While wasps can be useful by consuming dead insects or eating pesky flies, they can be a nuisance to humans too. 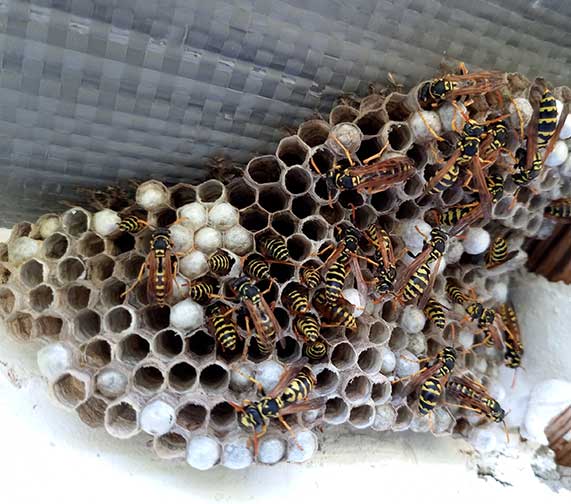 First and foremost, wasps sting and their venom contains a pheromone that will cause other wasps to become aggressive. Generally, the symptoms of a wasp sting will lessen within a day, but it can cause allergic reactions in some people and animals which could cause anaphylactic shock and even death.

Wasps nest in all kinds of inconvenient locations that can make their removal difficult for a homeowner. These nests are made of chewed up wood to make a paper-like pulp which they mold and grow to be their home. It is a good idea to call a professional pest control company to remove these nests. At Golden Hills Pest Control we often find wasps nests in the eaves of a building, on playground equipment, in fireplaces, and along fence lines. Thousands of wasps can live in one nest at a time. Wasps are most active in warm weather as they are not able to endure the cold. 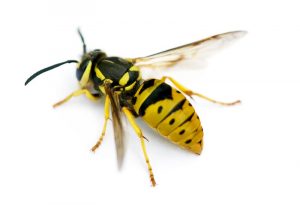 Yellow Jackets are technically a specific type of wasp. Yellow jackets and wasps are both very common in the Sacramento area in the warmer months and can be a nuisance pest around many homes and businesses. They tend to be just slightly smaller than a paper wasp but are much more aggressive. Yellow jackets both bite and sting.

They are attracted to sugar and protein and can often be found around garbage. While a paper wasp’s nest is often found high up on a structure a yellow jacket nest is usually found closer to the ground and in more secluded or protected spaces. Yellow jacket nests are also larger which in turn means their populations are usually higher than a paper wasp colony.

If you think you have yellow jackets or wasps on your property, a call to Golden Hills Pest Control will help resolve the issue. Our professional pest control technicians will work to identify the type of pest and how to best to remove the nest.